Indian television advertising has come a long way since the soap commercials of yore. Made in India Ads now appeal to a more mature and internationalized audience. This is evident by from the fact that a large number of international viewers are beginning to notice, understand, appreciate and award these commercials.
A case in point is the performance of Indian TVC's at Cannes Lions. Cannes Lions are the most sought after awards in the world when it comes to advertising, and people there are sitting up to take notice. In the last 3 years, no less than 20 ads have been nominated (few have even won) prestigious Cannes Lions. Two factors have contributed to this success. one, the content and creativity of these commercials has shifted ever so slightly, so as to make sense to a global audience. and two, the execution and production quality (post production, graphics, CGI, VFX etc.) has evolved to match the best in the world.
The latter reason is particularly heartening for CGI, VFX practitioners in India as it indicates the existence of a higher playing field. It means the state of the industry is getting enhanced, and more people are making better films with richer content, better execution and far greater Visual Effects. This can only mean one thing. Life gets better if you are a VFX artist!
Posted by Unknown at 10:33 PM No comments: 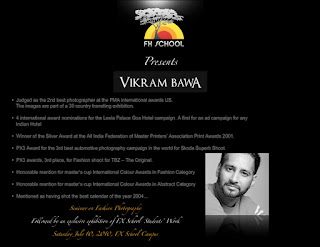 Come see the magic created by its students in an exhibition of their work.

See You There!
Cheers!!


*(Seminar for the Advance Photography students of FX School only).
Posted by Unknown at 9:00 PM 65 comments: