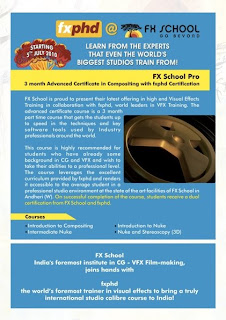 Mumbai, May 28, 2010: FX School enters into an exclusive partnership with FXPHD to offer the best visual effects and CG training the world has to offer, to the students of Mumbai. Through this partnership, FXPHD will bring its excellent studio calibre training to the students and FX School will add localization to what is otherwise a purely online self-learning course. FX School will provide the infrastructure and facilities that students will need to learn and practice also giving students an opportunity to capture their own footage through use of its professional studio facilities and equipments rather than use only those provided in the course. Furthermore, students whose primary language is not English will also now have easy access to this training.

Commenting on this partnership, Mr. Abhyudaya Morarka, Director, FX School said, “Our partnership with FXPHD is yet another solid step toward realizing our mission of providing the best CG – VFX edu-training in India and becoming the de facto Gold Standard in the industry.” Present at the occasion to signify this partnership is David Edgar, founder and senior management of FXPHD along with Leonard Coster, a mentor at FXPHD.

FXPHD is a vfx, production, post-production training program led by professionals which offers both application and craft-based courses. The curriculum includes courses in applications such as Nuke, Flame, Maya, Houdini, After Effects, Final Cut, Color, and more. FXPHD’s goal is to provide structured training which builds term upon term in a modular fashion. A perfect match in realizing this goal is FX School, a high-end quality institute that offers specialized education programmes in the fields of animation, visual effects, photography and digital filmmaking. Equipped with world class infrastructure and being the first institute in India to have a production-ready environment including a state-of-the-art chroma studio, fully-equipped practice labs and art rooms, FX School offers an inspirational learning environment which results in students graduating as polished, industry-ready professionals poised to start from at the top.

FXPHD is a vfx, production, post-production training program led by professionals. They offer both application and craft-based courses. Their curriculum includes courses in applications such as Nuke, Flame, Maya, Houdini, After Effects, Final Cut, Color, and more. Their goal is to provide structured training which builds term upon term in a modular fashion.

Members of FXPHD -- called postgrads -- have access to the high quality footage from FXPHD shoots as well as other effects material, such as traditional 2D animation and advanced multi-pass 3D render. This allows the users to create their own composites and build shots for their reels under the instruction of FXPHD Professors. Footage ranges from NTSC and PAL all the way up to 4:4:4 1920x1080 imagery.

Over the history of FXPHD, they have grown to become the leading online subscription site for high-end post-production training. Over 90% of FXPHD’s members rate FXPHD a "brilliant" or "great" value for their money -- with the same percentage rating their course professors "great" or "exceptional".


Posted by Unknown at 11:30 PM No comments: Links to this post 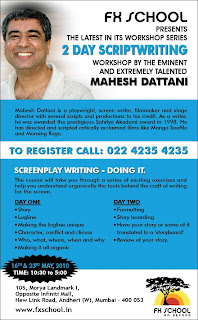 FX School presents the latest in its workshop series - A 2 Day Scriptwriting workshop by the eminent and extremely talented Mr. Mahesh Dattani.

Mahesh Dattani is a playwright, screen writer, filmmaker and stage director with several scripts and productions to his credit. As a writer, he has been awarded the prestigious Sahitya Akademi award in 1998. He has directed and scripted critically acclaimed films like Mango Souffle and Morning Raga.

The course will take you through a series of exciting exercises and
help you understand organically the tools behind the craft of writing
for the screen.

1. Story
What does story mean to you? Not through intellectual speculation but
through exercises and meditation. Discovering your own unique sense of
story - what will make your screenplay stand out.

2. Logline
Finding the right logline of your story. A logline is essential not
only to sell your story but to help you write a focused screenplay.

3. Making the logline unique
Meditating on the logline and different approaches to making it unique.

4. Character, conflict and climax
Exploring the three Cs through exercises and focusing on your logline.

5. Who, what, where, when and why
Exploring setting, action, character, time and motivation to help
unfold the action.

6. Making it all organic
How best to use the craft without actually showing it. Examples of
great screenplays.

6. Formatting
How to format a screenplay. Industry requisites and software that helps.

7. Story boarding
How to tell your story in pictures - the medium of your art.

8. Have your story or some of it translated to a 'storyboard'

9. Review of your story.

Experts at FX School will sit in class and give you an opportunity to
pitch your story to them followed by a review.

Hurry! Limited Seats!!
Posted by Unknown at 12:36 AM No comments: Links to this post

Masterclass in Filmmaking - Learn from LSD 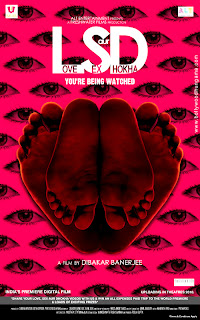 Dibakar Banerjee’s LSD is a Master Class for aspiring film makers. Now film making need not be a boon only for the elite, even the common man can now see film making as a great career option. Here are the four important lessons we can learn from the film:

Firstly, Dibakar did not try to compete with a mainstream film. As Dibakar puts it “What we are trying to do with this film is actually a totally new kind of film making”. He proved a point that shooting on digital does not mean poor production quality.

Mainstream films are made at mainstream film budget i.e. over 20 crores. Not many aspiring film makers have such money to use, so they are better off choosing their subjects accordingly. Don’t attempt to make a ‘Karan Johar’ film without mounting it on that big a canvas, else it will leave you in no man’s land.

The amateur filmmaker never has a budget on his side. So turn it into an advantage the Dibakar way.

He says “Because of the kind of subjects that I tackle and the kind of liberty that I want to take with my film making, it is fine with me to exist in the smaller by lanes of the great industry that Bollywood is”.

The lower budget keeps his thinking focused. He thinks, and executes accordingly. He chose actors that neither dented his budget nor affected the film’s prospects.
An intelligent maker knows that if the content is hard hitting the camera would not matter be it a film camera or the low cost digital camera used in LSD. On the other hand, Dibakar effectively used the changing scenario in film production and exhibition. Over the last few years digital has made its presence felt and any amateur film maker should use the digital medium to tell a story.

Making a film on a low cost digital camera could save a film maker more than Rs 40 lacs! That’s a lot for a small film

Dibakar chose the content so that he could make the film at a shoe string budget.

LESSON 3: PLANNING WITH THE RIGHT TEAM

The effort on pre production was one of the keys to the success of most films and this film is no exception.

Any aspiring film maker must do his homework well in terms a detailed bound script, appropriate casting, rehearsals, locations, choice of technology and a team that even though may not be the best but still suits his temperament.

LESSON 4 : LOW BUDGET DOES NOT MEAN POVERTY OF BELIEF

Dibakar says “We are trying to change the rules”.

Dibakar chose to follow his own method of making a film that is off beat yet commercially viable, like all his other ventures earlier (Khosla Ka Ghosla, Oye Lucky-Lucky Oye)

So a low budget choice need not be a reason for making a bad film. If you can’t follow the rules, you change the rules. Inability to throw around money does make the vision or craft less important. It is important that the film maker believes that.

So LSD gives the industry a few lessons and maybe a new high in terms of content and film makers.

Posted by Unknown at 2:36 AM No comments: Links to this post

One Day Workshop on Directing Actors 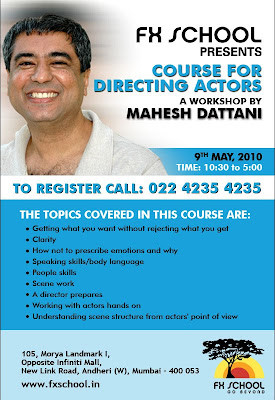 The course will take you through a series of exciting exercises and help you understand organically the tools behind the craft of writing & directing actors for the screen.

The course covers the following topics.

1. Getting what you want without rejecting what you get.
2. Clarity
3. How not to prescribe emotions and why
4. The actor's temperament
5. Speaking skills/body language
6, People skills
7. Scene work
8. A director prepares.
9. Working with actors hands on.
10. Understanding scene structure from actors' point of view.